8 Mistakes that startups must avoid while entering into NDA

The main purpose of NDA is to protect the confidentiality of information shared with an outsider. Not having a signed and enforceable NDA may have drastic consequences down the road when the information which was meant to be confidential falls into the wrong hands. 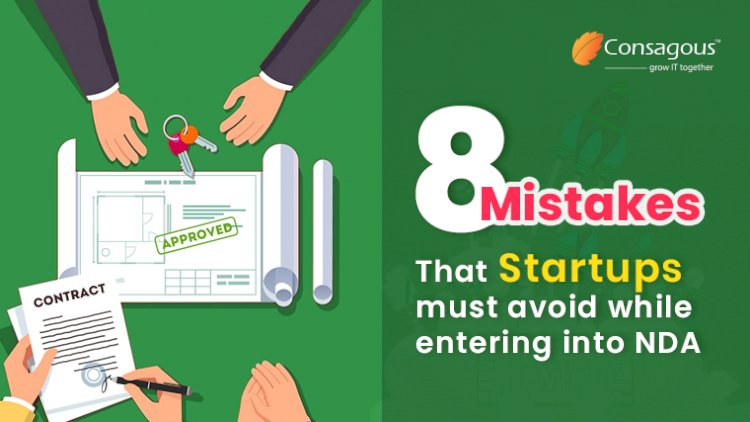 The element that makes a startup innovative is its unique idea or new approach to solve existing issues. An idea signifies its very existence so, by all means, that idea should be safeguarded. Here is when Non-disclosure agreement comes in picture. Whether you are considering a joint venture partner, an interested investor, or an employee at a significant position, a Non-Disclosure Agreement must be executed.

The main purpose of NDA is to protect the confidentiality of information shared with an outsider. Not having a signed and enforceable NDA may have drastic consequences down the road when the information which was meant to be confidential falls into the wrong hands.

Though a proper attorney should be hired to avoid all the pitfalls still one must have knowledge of what could go wrong that render NDAs unenforceable.

Some of the common mistakes that make NDA un-enforceable are as follows:

Mistake No. 1: Not specifying what information will be covered and for how long

An NDA must clearly describe:

(1) What type of information is being disclosed;

(2) Whether the NDA covers only written disclosures or both written and oral disclosures;

(3) By what means the information will be disclosed;

(4) How the disclosed information may be used by the recipient; and

(5) How long will the recipient be bound by this NDA.

Missing one or more of these terms may cause problems between the parties when they actually begin to disclose confidential information to each other.

Mistake No. 2: Not specifying when or how disputes related to the NDA will be resolved

It’s not sufficient to just ask for confidentiality through a piece of paper. A procedure should be outlined for enforcing the agreement. Like what happens if the information receiving party violates the agreement?

An NDA must have a clause to specify where and how any disputes related to the NDA will be resolved and by what means like mediation, arbitration or litigation.  It should also specify the law which will govern the agreement.

Mistake No. 3: Exceptions not included

NDA with clauses that are difficult to adhere to is stricken down by courts so, including exceptions in the NDA will increase the chances that it will actually hold up in court. Exceptions usually include information which is already public, information which was received by a third party and information that the signer have developed on a personal account.

Mistake No. 4: Not naming the disclosed information as “Confidential”

Any information disclosed under the NDA should be marked as “Confidential”. Corporates falsely believe that they are covered under one blanket NDA but that is not the case. All shared information must be designated as confidential to avoid future disputes as to whether certain information was meant to be confidential or not.

Mistake No. 5: Not retaining an electronic copy of a signed NDA

It is very common to occur that a hard copy of a signed NDA is somehow lost and no one can find an electronic copy with all the signatures.

To prevent this, one should always designate one person, who is responsible for collecting all the necessary signatures and saving the NDA somewhere where it can be easily found.

Clerical errors can render contract of any sort invalid, so it’s crucial to get all of the information correct. For instance, if you are working with a company, you want to ensure that you use the proper company name in the agreement with ‘Ltd.’ included at the end, failing to include “Ltd.” at the end of the company name or using DBA(Doing Business As) name may render the NDA invalid.

Mistake No. 7: Agreements signed by an unauthorized person

If an NDA is signed by a person who is not entitled to execute a binding agreement, it could potentially invalidate the agreement. This is a common mistake in organizations that follow organizational bylaws or operating agreements that designate specific employees who have the power to sign an agreement, regardless of the content of those agreements.

For instance, a representative of a company may have the power to interact and deal with the client but he may not be entitled to sign any sort of contract.

Mistake No. 8:  Not defining the scope of what you are disclosing to the party who signed the NDA

A party should always define the scope of what is being disclosed and essentially check whether the information disclosed is absolutely necessary for the other party to know related to the scope of the NDA.

The costs of enforcing or attempting to enforce an NDA is not known to be economic, so limiting the disclosure of information may help a party avoid the risk and expense of litigation.