FaceApp — Everything You Need to Know!

An Artificial Intelligence integrated face editing app FaceApp is a newbie in the app market but it has gained huge publicity for its old age feature. Today everyone who is updated on social media is aware of this AI solutions, if you are not here is everything about FaceApp. 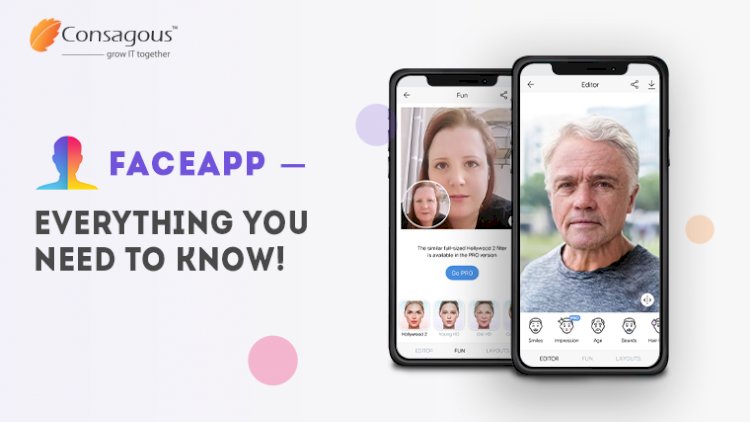 After the storming entry of TikToK, FaceApp is making a place in peoples’ smartphones and allows them to see their future look. Yess!! This is absolutely true now you check how you’ll look when you are 80 with FaceApp. Still confused? Let’s understand in deep.

Recently Russian company Wireless Lab has launched face changer app FaceApp for iOS and Android platforms. This app uses Artificial Intelligence solutions to generate highly realistic transformations of faces in photographs. The app can transform a face to make it look older,  younger, smile, or even can change gender. FaceApp was launched in 2017 but it recently gained huge popularity among the audience.

Not only commoners but also the world’s best-known celebrities like Jonas Brothers, Deplo, Snooki and JWoww, Lebron James, Carrie Underwood, and Mike Fisher have shared their old age look in their Instagram account.

FaceApp has enriched with various face changing features with some creative marks and experiments that are successfully turning human face according to their choice.

This is the first app that is gaining huge words from LGBT and transgender communities because of its feature that can change the appearance of a person as the opposite gender.

How Does FaceApp Works?

The major programming languages for building iOS apps are:

What is the Cost of FaceApp Development?

The cost of a photo editing app like FaceApp will depend on the complexity and number of feature clients want to add in the project. According to Consagous expert team of mobile app developers, it will take approx 1400 to 1500 hours to develop an app like FaceApp.

So, the estimated cost to develop an app like FaceApp would go somewhere around USD 35K-40K.

How To Promote Face Editing App in the Competitive Market?

FaceApp has won the hearts of millions with its perfect blend of design and functionality. The existing face editing apps are not containing as amazing features as FaceApp, therefore, the app is going to be a  big hit.

If you are thinking of creating a new photo editing app then Consagous can be your perfect choice to develop an AI face editor app like FaceApp.