Google and Canonical have come together to give the developer community Flutter Linux Alpha- something that’s surely going to take Flutter to new heights. Here’s what the Flutter SDK for Linux has in store for developers. 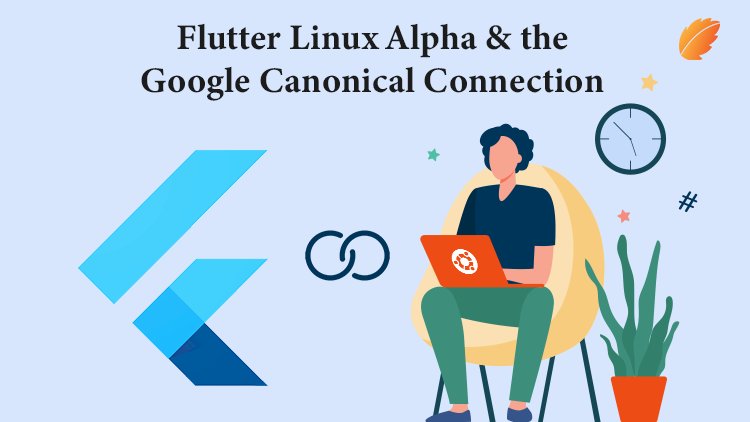 The speed with which the world of technology is evolving is simply unimaginable. Every single day, technologies continue to evolve and become obsolete. If you are someone who follows or is pretty well- acquainted with the world of mobile app development, it will be very hard for you to not have come across the term Flutter. Chances are, if you are reading this, you are well aware of what Flutter is as well as its potential.

For those rare people too, who are yet to know about it, we have it covered for you.

In the simplest of terms, Flutter is an open-source Software Development Kit (SDK), through which the developers can create native-like iOS and Android applications, right from the same coding platform.

First introduced by Google in the year 2015, Flutter has been gradually gaining more and more momentum over the years. In fact, Github has recognized Flutter as one of the top SDK, thanks to the number of features and ease in app development that it offers.

Perhaps, the most striking feature of Flutter is its ability to make use of different widgets that are combined together to form an absolutely brilliant UI. Long story short, app development with Flutter is a complete delight for both the developers as well as the end-users.

Saves A Lot of Time And Money

With Flutter, cross-platform development is a breeze, that results in saving a lot of time and money in the process.

Any change in the code gets instantly reflected through the hot reload feature, making the entire development process quick and very efficient.

With its own set of widgets and a cutting-edge Dart setup, Flutter storms past its contemporary SDK’s effortlessly.

The fact that developer communities contribute and update the documentation for building resources is another big benefit of Flutter.

These are some of the main reasons as to why the number of users for Flutter-based apps is around 200 million marks. This number is bound to grow more extensively in the coming time, which is why Google takes notice and constantly updates the Flutter Linux Alpha to keep developers engrossed and keep building more amazing apps.

Because Flutter has been met with such a warm reception since the very first day, the aim of Google is to load it up with more system friendly perks that bring about a desktop-like experience, which also encompasses the resetting of the mechanism in order to bring it closer to a keyboard and mouse supported experience than ever.

Customizable options for the complex windows along with better and more enhanced UI functionality for desktops follow later on.

With Flutter Linux Alpha, Flutter makes itself much more capable than ever to tackle feature-rich desktop applications as well, other than already leading the mobile UI scenario. This is the big reason why Google and Canonical have come together and released the Linux Alpha for Flutter as well.

WHAT EXACTLY DOES CANONICAL BRING TO THE TABLE?

While Canonical is a highly reputed company for Ubuntu-based publishings and distributing them, it saw a great opportunity to also delve into Linux distributions apart from Ubuntu, with the latter also being a highly feasible platform for Flutter developers.

Because Flutter witnessed massive growth and popularity in a short span of time, Canonical wanted to be available as well, when it already made the life of the entire developer community easier by enabling app publishing on Linux, through its application store. This was made possible by the much-needed Linux desktop support for Flutter.

With Linux now a perfect solution for Flutter, a number of more out of the box solutions are possible for the creation of cutting-edge apps for users who are more into Linux.

THE ‘FLUTTER’ING EXCITEMENT OF CANONICAL

Canonical has already assigned a team of developers to work in close association with the Google developers to uncover Flutter’s exciting potential for its Linux distributions.

A Flutter SDK for Linux has been expressly made available for all the Linux users in the Snap store. The Kit contains everything that is required for developers for great Flutter application development for Linux.

To take complete advantage of it all, users can simply install the Flutter SDK snap with their choice of IDE. For example, if a developer wishes to create a Flutter app in Linux and has selected the Visual Studio Code as the IDE, then it’s almost done!

To sum it up, Canonical and Google together, and the release of Flutter Linux Alpha has now empowered the developers to get the most out of Flutter by getting Flutter support. Canonical has made it easier than ever to create a quality Linux app with Flutter.

For any company or business, a top-class cross-platform app is the best when made with Flutter. If you are one of such entities, Consagous Technologies can help you build a feature-rich and technology-driven development process. Our Flutter app development service is thoroughly professional and gives you the perfect return for your investment.