How Are Tech Companies Coping with the COVID-19 Scare?

The biggest economic powerhouses are on their knees as they constantly struggle to contain the damage this pandemic is causing on an hourly basis. The lives of some of the world’s biggest tech companies in USA too have been made difficult. 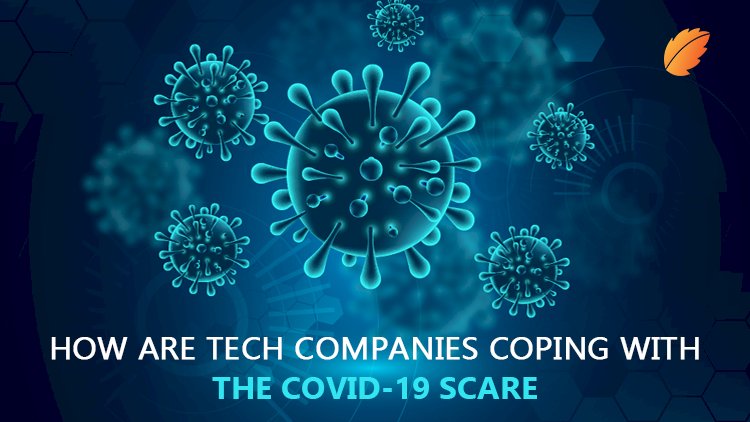 Since the coronavirus announcement or COVID-19, as we also call it, has been wreaking havoc on lives all over the globe. The biggest economic powerhouses are on their knees as they constantly struggle to contain the damage this pandemic is causing on an hourly basis. The lives of some of the world’s biggest tech companies in USA too have been made difficult. Postponing or outright cancellation of conferences, restricting employee travel, and persistent encouragement to work from homes are some of the ways companies are trying to work out, in general terms.

As far the USA is concerned, these measures are already in effect, particularly in the state of Seattle, home to Microsoft and Amazon. This is a time when a number of tech companies look to bring new products, technologies, and breakthroughs in front of the world audience. Due to COVID-19 though, everything has, for the moment, gone for a toss.

While the world waits to get back to COVID-19 free earth, here’s how the biggest companies in the world are handling the outbreak, to keep things operational-

Apple was perhaps the first company to issue a public statement that the virus had indeed, made a dent on its ambitions for the first quarter. They informed the stakeholders about not being able to meet the expected revenue guidelines for the March quarter.

Then, they shut down their retail stores and offices in China, which now have opened again.

The much anticipated ‘iPhone SE2’ or ‘iPhone 9’ was to be reportedly launched in the last week of March, which is now supposedly postponed.

Production units have become operational, but the pace in restoring normalcy is slow.

Presently, apart from keeping employees at home, it is busy rejecting apps providing wrong information related to the virus from the App Store.

The Seattle office of Amazon has been hit hard, as there have been around 70 confirmed cases. But while quite a large number of people have lost their jobs, Amazon has opened up 100,000 new jobs to take care of the extra deliveries, and at the same time, give them a source of income as they are without jobs in these trying times.

Other than that, the company has taken a firm stand on medical products that are sold without approval from the Food & Drug Administration (FDA). The existing employee pay of $15 has also been increased by $2 for each hour.

This tech giant had to call off its annual I/O Developers Conference, which hosts Android developers from across the world to exhibit their Android innovations. The conference is also where the company was to probably launch the Pixel 4a, a budget sibling to Pixel 4. Again, Google employees are working from home to keep things as smooth as possible.

The company is also working in close association with the US government for the development of a website completely dedicated to educate people and provide resources on COVID-19. The search engine, YouTube and Maps are churning out real-time information right within the first 24 hours with the people globally.

Take into account the contribution it has made to better health research by contributing DeepMind to its AphaFold system.

Microsoft confirmed that 2 of its employees tested positive for coronavirus, and it is, in fact, the first large technology company who has committed to consistently pay its hourly workers. As there are a number of Microsoft employees working from home, these hourly workers, who are unable to work from their homes will still get paid.

The company is also ensuring that all employees relying on the Work From Home model have virtual systems in place for smooth coordination. Apart from this, Microsoft is also assisting the CDC to take note of the symptoms and give out information for quick action. For this, it is using its Healthcare Bot Service, powered by MS Azure.

It is not less than a spectacle to see such highly renowned companies providing global technology services do their bit to aid businesses, researches, and even education systems. They will be incurring losses in revenue and capital, and it will be quite a while that they bring out new products and innovations to the world now, but their actions and safety measures are a definite effort to make the world a better place when they do so.