An AR-powered delivery app is essential for the food industry. People tend to use their smartphones more, depending on them in practically every aspect of their lives. Investing in AR/VR app development will skyrocket your business visibility and recognition. Let's see how you can add your icon to their screens with must-have features for a Domino's-like food delivery app powered by Augmented Reality app development services. 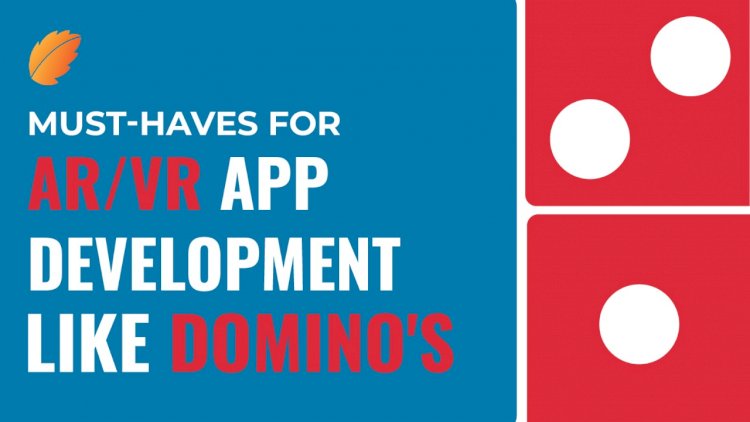 In 1960, Domino's had a modest beginning with just one store. Today, the biggest pizza company in the world proudly carries on its tradition of bringing delicious pizza to customers' doors.

Its eateries offer dine-in, carryout, and delivery options for pizza, and other fast food options are all available to Domino's customers. Additionally, it provides a variety of toppings based on region and culture. It owns other overseas markets through a network of company-owned and franchise locations around the US and the rest of the world.

Why Domino's Pizza? Why not invest in any AR/VR app development that delivers pizza or other food? The reason is easy to guess.

Domino's is unique compared to other pizza delivery services. It elevates pizza delivery to a high-tech level while keeping it user-friendly and approachable. With the help of their Extended Reality technology services, Domino’s makes ordering pizza a distinctive experience that converts consumers into devoted patrons for life.

What has Domino’s been doing?

Although the process is as simple as counting to three for the consumers, complex systems are at work to make it possible. To make ordering pizza as simple and uncomplicated as possible, Domino's plans to test every piece of technology available.

3D models, AR VR services, voice recognition, and driverless automobiles are some of the technologies Domino's uses to keep up with customers. Augmented Reality app development has been at the center of operations.

Of course, concentrating so much on AR technology sets Domino's apart from its competitors.

Domino's is gaining more and more customers, primarily millennials, but facing harsh criticism for investing excessively in high-tech equipment for such a primary task as preparing and delivering meals.

Domino's does almost 65% of its business online suggests that it may have been wise to focus on that market segment.

How has Domino's scaled its business using AR/VR App Development?

Domino's integrated Augmented Reality app development services allow customers to experience the power of innovation. It is one of the company's primary channels for connecting with consumers and conducting business. The business picked the mobile-first strategy for digitizing its service because it understood the value of the mobile platform at an early enough stage.

Every aspect of the digital mix has been expanding, but mobile has been increasing unmistakably more quickly than laptops and desktops, according to Patrick Doyle, CEO of Domino's Pizza.

‘The Domino's app was first made available for iPhone in 2011 and then for Android a year later.’

Let's attempt to reverse-engineer Domino's Pizza's decision to invest in Augmented Reality Development Services and its functionality to determine what features are must-haves. We'll also detail these features that use Extended Reality app development services.

What are the must-have features in Domino's like AR/VR app development?

Domino's AR/VR app development has functionalities that combine aspects common to all meal delivery apps with novel ideas that leave many of us wondering, 'Wow, how did they even come up with that?'

1. Native Apps for iOS and Android

As we previously stated, Domino's focused on building the most user-friendly, responsive, and intuitive augmented reality app possible to reach as many people as possible. Instead of creating a cross-platform application, the brand used Augmented Reality app development services, offering two native applications.

There are several benefits to developing native apps as opposed to cross-platform ones. In general, native apps perform better and are better suited for long-term use with the ability to incorporate additional capabilities, such as AR VR Services.

Integrating APIs and other third-party components is simpler and more efficient with native programs. Even with the very minimum of features, food delivery apps will need third-party connections, such as payment processors and mapping systems.

Therefore, in this instance, the native development strategy is appropriate.

The AR software will acquire the information it needs from the social profile, so users don't have to create and remember another login or fill out their profiles.

For Domino's, a social sign-in gives up a new avenue for marketing because consumers can quickly share their experiences on social media, giving the company more exposure.

User registration is the foundation for other services, such as order history, comments, and loyalty programs. As a result of their connection to user profiles, making a profile should be the first step while using the AR app.

Additionally, user accounts allow users to save their delivery addresses, so they don't have to enter them each time they place an order. In this way, AR/VR app development eases Login and Registration experiences for users.

The Domino's AR app offers a DIY option in addition to the usual menu's selection of numerous pizzas, sandwiches, drinks, and desserts. Be your chef and assemble the pizza in any way you wish. Add whatever things you like in any unique combinations.

Users can visualize their pizzas using the Pizza Chef tool, specially made for this purpose. Domino's, meanwhile, would not accept something simple and overused, like a list of checks. No, it's AR VR services for a technologically advanced company like Domino's!

As Domino's uses Augmented Reality app development services for its apps, you can see your pizza self-assemble on your desk or kitchen counter. Add your olives, pickles, or bacon, and see the result immediately.

After you are satisfied with your pizza, select Checkout and wait for delivery of the physical replica of your virtual pizza to your door.

Real-time tracking of your favorite pizza delivery is available. Knowing how long you will have to wait after placing your supper order is usually helpful. Domino's pizza added the GPS tracking feature during its AR/VR app development to reduce waiting times.

Chromecast allows Android users to display the pizza delivery route on their TVs. Following your dinner on the map might be entertaining for guests or enjoyable for the whole family.

If you chance to grow hungry while spending time in a park, beach or swimming pool on your day off, Domino's may bring your order there.

Integrating GPS tracking, location determination, and map service is complicated. With Augmented Reality app development, the app can locate your precise location and provide a list of delivery hotspots. Choose the one that is most convenient for you and let the delivery person know where to find you.

Domino's asks its consumers to propose other areas it might include in the service, apart from the hotspot locations initially programmed in the Augmented Reality app.

All major credit cards, PayPal, Apple Pay, and Google Pay, are accepted at Domino's Pizza. These payment methods are available on iOS and Android devices, respectively. It supports the cash option for order pick-up from the Domino's store locations.

An AR/VR app development for food delivery can be as technologically advanced as possible, as you can see from the example of Domino's Pizza AR app.