Entertainment and media app development seem simple, but there’s a lot that goes into creating just the perfect app that serves the purpose and takes user experience to a whole new level. 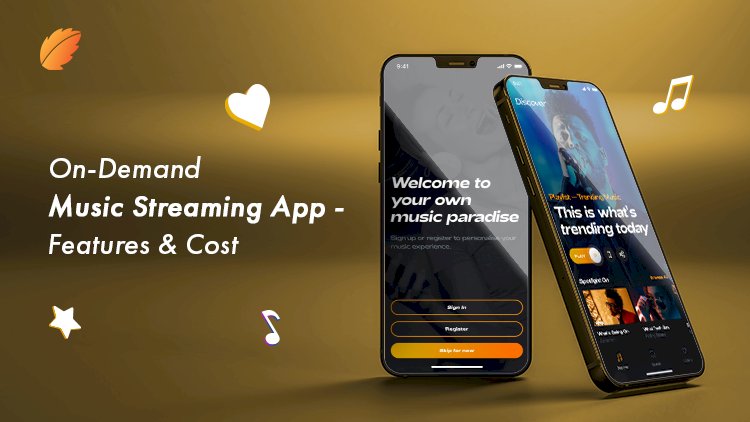 The first time we heard music on our mobile phones was way back, almost a couple of decades ago. That too was through the in-built radio.

Back to the present, and there has been a complete revolution of sorts about how we have been going about to satisfy our craving for some good music to suit our varying moods. This revolution has been powered by a truly cutting-edge music streaming app development.

The Era Of Music Streaming

The rapid rise of the music streaming domain over the last few years has prompted a number of companies to foray into on-demand music app development as a profitable avenue. With people looking for something to keep themselves engrossed, these apps have proven to be the perfect antidote.

As far as the types or categories of music streaming apps are concerned, there are three broad kinds-

On-demand music streaming app allows the users to access a huge number of music tracks that are within the range of different accessibility terms of the app. Such apps can either be free or offered with a paid subscription.

To entice more premium buyers, some premium features can be offered free for a limited period of time. Spotify is a great example of such an app.

Such music apps allow the upload and sharing of audio files and file transfer via the cloud. Basically, users get access to the ability to host files on their own, wherein they become the providers of cloud space for song back-ups.

Some of the known apps in the cloud storage music app arena are Groove Music and Google Play among others.

These apps don’t give users the flexibility to play songs on demand, but they offer an interface that is reminiscent of a jockey that plays music as per the preferences of a user. It’s important to note that these apps are perhaps the most economically priced music apps, as they bring no licensing complications in their working.

Shoutcast is the prime instance of an app here.

Any sort of entertainment app development brings with it the need to incorporate a multitude of features for an app that needs to deliver a number of functions with easy navigation throughout the app.

Music apps are no different in this regard. Let’s have a look into some features that can’t be ignored at all-

This is one feature that needs to be as quick and simple as possible. Other than those time-consuming process of sign-up forms, it can be made simple by allowing the sign-up through social media profiles like Facebook.

A simple search bar is not enough, the way competition is increasing. The entire search process needs to be smarter, where relevant options also come up, related to a particular search.

Allowing users the freedom to use the music app as they like is something that can’t be ignored. Let them make their own multiple playlists, add or delete them, have it the same with songs, and just allow them to have fun in the app.

Modifying the different app and audio settings are something that blows a new life in the complete user experience of music streaming apps. Auto downloading, synchronization on multiple devices, and more such settings.

To develop a music streaming app, there are a number of factors that come into play. Like all other kinds of apps, the cost of music streaming apps too depend on the kind of technology and features that you wish to see in your music app.

Other than this, the location of your service provider, the number of platforms where the app is to be drafted, and the requisite charges are also the ones that come into play.

The right set of technology for your music streaming app is integral to the overall app success. To draft a seamless and interactive app, a smart choice of technology can be the perfect recipe for success.

No music streaming app can work without proper licensing. Rotation of music content involves the payment of royalties to the rightful, well, rightsholders. Not pertaining to this procedure brings in the violation of copyrights, something that can jeopardize the harmonious drafting of your app.

To get the license for your music streaming app, you will be requiring the Public Performance Rights.

In the USA, the handling of the entire process is done by a couple of agencies-

Once you have purchased the licensing rights and hired a great team of developers to make it see the light of the day, it is important to give a lot of thought to the profit aspect as well.

Other than providing users with a great UI/UX with engaging content to keep them hooked, there are a number of monetization plans and strategies to generate profitable revenue from the music streaming app.

These two ways are the best ones for the purpose-

Right before a track is played, there can be a tactful ad placed to become sure of generating something. However, what’s essential is to figure out that fine line between feasible ads and ad spamming.

Monthly or annual subscriptions are amazing ways to access unlimited music, such as Apple Music. It’s a pretty popular way as there are licensing fees involved in copyrighted music.

If you are looking to get music streaming app developed, and on the hunt for a quality entertainment and media app development, look no further than Consagous Technologies. With more than a decade of experience in coming up with cutting-edge mobile app development, the team at Consagous has the perfect idea about your needs and requirements. Get in touch with the team today!