Software testing and quality assurance have become important cogs in the overall process of deployment. The margins between software development and QA too, have been steadily diminishing, bringing us to a question- what do QA and testing have in store for 2021? 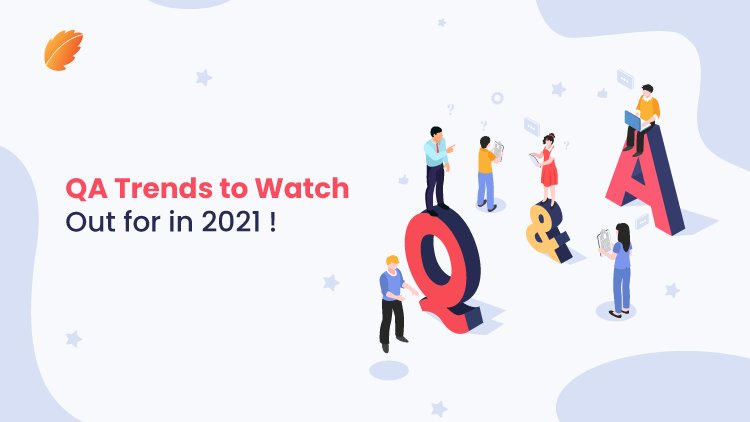 Software testing and quality assurance- these two practices have been consistently evolving over a long period of time now, making rapid improvements in their stride. Till a very short while ago, Quality Assurance, or QA, was considered to be an entirely separate function but is now increasingly becoming a crucial part of the entire development process as a whole.

As far as the overall evolution of the IT industry is concerned, this change in perception of QA has had a big role to play. With increased competition, delivering products and services on time has put somewhat undue pressure on the companies to deliver. This is where quality control has become so very important.

Such has been the interdependence of cutting-edge software development and QA that the current software trends encompass the best security and performance measures on offer.

As far as the question of Quality Assurance goes, new techniques have been coming up for the last few years. This is one of the main reasons why there is such a wide acceptance in multiple IT domains.

Because technologies are changing at a rapid pace, quality assurance analysts tend to face a number of issues in their daily lives. However, reaching the market as quickly as possible is something that’s always at the back of the mind.

This is why here are some trends that we feel will have a big role to play in the coming years, as far as software testing and quality assurance services are concerned-

Bringing AI and ML into QA eliminates the problem of companies getting sucked into an automation trap, wherein testing teams fail to take care of the issues found in the previous test runs due to a lack of time.

If traditional software testing methods are anything to go by, the business functionality brings about an evolution in the applications with changing requirements.

With Artificial Intelligence and Machine Language in the midst, there can be a better sorting of the test cases, where the ones on a high priority get tackled first. The test automation code also gets the liberty of automation in itself- a huge plus.

In the years to come, AI and ML will have a big role to play in evaluating the test results, bringing in better and more sorted test cases for testing teams.

With continuous delivery of paramount importance today, the same could not have been achieved without the advent of automated testing. Thanks to the overall agile approach, any bugs and problems get timely detected, making QA enjoy a higher degree of efficiency.

However, despite all kinds of automation, manual testing will still have its fair share of takers. The most impeccable quality will involve a sophisticated combination of both automated and manual tests, bringing to the fore a pretty effective testing strategy.

3- A Change in The Traditional Roles of Testers

Because the overall situation is becoming pretty dynamic as time goes on, testers will be required to enhance their skill base with the motive of being able to handle more job roles.

With Agile methods and DevOps coming into the foray(more on these two later), the collaboration between developers and testers is imminent in the near future. With such a situation, coding skills will only take things so far.

Developing more skills in Machine Learning and AI is a good way to go, as they become more integrated with the QA process. With company management encouraging testers to take the right set of initiatives, added skills will have the potential to work wonders.

As digital transformation continues to become the staple of today’s world, digital testing too is also set to continue for the foreseeable future. With increasing competition, companies are continually experimenting on the methods, and agile methodologies are taking all the accolades there.

QA that’s driven by customer experience is definitely a trend to look out for in the near future.

As far as DevOps is concerned, the traditional lines between testing, operations, and development get taken care of. The agenda behind this is to lead to a better pace of deployment, reduce the time taken to hit markets, and also ensure higher ROI in the process.

With more elaborate demands, project and release changes, automation of software testing and QA outsourcing will take the world in the coming months.

One of the leading software quality assurance service providers, the team at Consagous Technologies goes all in to provide every single one of its clients the most impeccable and professional service. For more than a decade, Consagous Technologies has been delivering solutions to companies all over the globe, to numerous accolades in the IT domain.