What Makes Flutter a Best Mobile App Development Platform for 2019?

Today mobile app development companies are looking for options to develop apps within a short duration with a limited budget. At this point, Flutter can be the best fit which can perfectly meet your requirements. 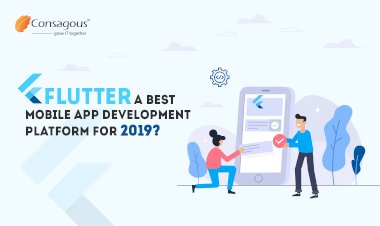 If you are a Mobile App Developer or belongs to a technical background, you must be aware of cross-platform frameworks  such as React Native, PhoneGap, Ionic, Xamarin, Flutter, and many others. If you are not then don’t worry in this blog we will discuss everything about cross-platforms and Flutter.

Cross Platform Mobile App Development is a procedure of app development in such a way that app can be run on multiple platforms. In this type of development, the code is written only once and can be supported by Android, iOS or Windows. These days cross-platform mobile application development has become quite popular because of its features and tools which are loved by mobile app developers as the trend of BYOD (Bring Your Own Device) is rising.

Hope now you have got an idea about Cross Platform Mobile App Development. Now, its time to discuss Flutter.

Flutter is an open source cross-platform mobile development framework introduced by Google in February 2018. It uses Dart language for programming and can be used to develop apps for Android, iOS, as well as for Google Fuchsia.

Flutter was launched to meet the ever-changing needs of mobile app developers that were missing in the previous cross-platform development tools. It is being used by developers to built something unique that hasn’t been around before. At Google, developers had been working meticulously on this before general use.

Existing Apps Which are Using Flutter App Development Services are:

Alibaba is the world’s largest e-commerce company founded by Jack Ma and Peng Lei on 4 April 1999. The company hosts the largest B2B, C2C, and B2C marketplaces in the world. It has been expanding into the media industry and generating huge revenues year on year.

Tencent is a known gaming company founded by Ma Huateng, Zhang Zhidong, Xu Chenye, Chen Yidan, and Zeng Liqing in November 1998. It has a 5th highest global brand value and surpassed the market value of US$500 billion in 2018.

Reflectly is a personal journal build with the help of Flutter App Development Services. It enables users to deal with negative thoughts, and teach them about the science of well-being.

This mindfulness app is driven by Artificial Intelligence.

Hamilton Musical is an official app for fans to access all things about Hamilton like video content, slideshows and more. It is designed by Flutter App Developers and allow users to share fun show-related stickers with friends and family.

Why Flutter is a Best Cross-Platform Mobile Frameworks for 2019?

The interesting thing about this open source platform is that it allows mobile app developers to create Android and iOS apps with just a single coding process. This feature not only makes it more convenient but also gives better performance. That’s the reason Flutter has become famous among Hybrid Mobile App Development Companies.

If you also want to build an app with Flutter, you should know which type of development it supports and does not support.

The future of Flutter seems to be bright and Google has been adding lots of new features in its versions. Flutter Mobile App Development has a lot of potential in the industry and if it is capable of filling the gap between quality and productivity then it is definitely going to take over the app development industry.