Looking to develop a blockchain application? This guide will show you the steps from ideation to deployment. Learn about the different aspects of blockchain app development, including benefits, trends, and more. 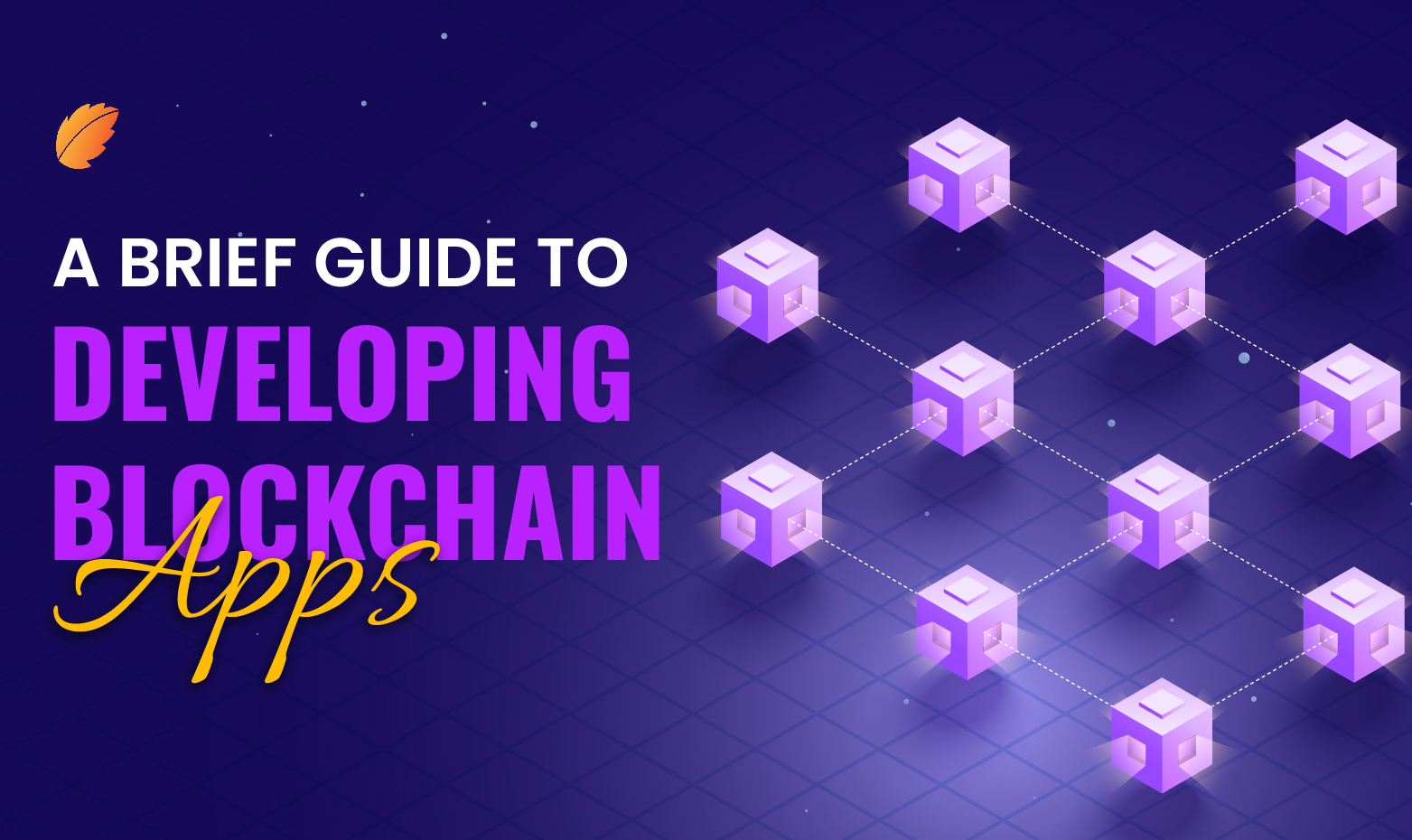 Blockchain has become the standard technology that powers applications thanks to its decentralization. The popularity and promising benefits of blockchain have helped build confidence among the masses, which has seen massive adoption in many industries. There is an unintended gap between growing demand and the implementation of blockchain technology. This is due to a need for more knowledge of blockchain development.

In the year 2009, Satoshi Nakamoto introduced the blockchain. Then in 2014, the technology was transformed with the title Blockchain 2.0. It is a system of blocks that contain transactions that have been timestamped. In contrast, Blocks are composed of three parts: data and a hash of the block, and a hash of the block before it.

Blocks are helpful to ensure that transactions are organized and safe. Every block is linked to the preceding one through cryptography, and that's why it's referred to as a blockchain. Simply put, blockchain is a shared ledger that keeps a record of transactions simpler and blocks any third party from altering the information.

Blockchain can also be used to monitor assets across an internet-based peer-to-peer system. Different companies use blockchain technology on a massive scale because of its efficient, stable, secure, and reliable transactions system.

Solana is one of the most used blockchain platforms to host decentralized applications. Most businesses are inclined towards Solana blockchain app development to win the market and generate more profits.

Types of Blockchain-Based On Networks and Cryptocurrency Support

It's an open ecosystem where only authorized users can take action based on their specific role. Blockchains of this kind are built by a set of rules that regulate how transactions are designed to meet the needs of a particular business (for example, the management of databases, auditing, etc.). E.g., Multichain.

The network is publicly accessible across all devices and computers in Blockchains with no permissions. Anyone can gain access to the code, launch an open node on local devices, begin an exchange on the network, and verify your transaction while remaining entirely anonymous. The blockchain, which is decentralized, open to all, and anonymously accessible, is referred to as Permissionless. E.g., Bitcoin and Ethereum.

In the words of the name, blockchain solutions operate on cryptocurrency. The most well-known blockchains in this category include wallets, crypto exchanges, services for ICO, and DApp.

This kind of blockchain app development service does not require crypto tokens. This type of blockchain's primary purpose is inventory management dependent on Distributed Ledger technology (DLT). Are you wondering what Distributed Ledger Technology is? From a technical standpoint, it's an information system distributed across many computers and nodes. Each node has an exact version of the ledger that can process independently.

Steps to Build a Blockchain Application from Scratch

There are many crucial aspects to be aware of while developing blockchain apps. These tips will help you communicate your requirements to the blockchain app developers you have hired. Take an interest!

This phase aims to determine and increase the level of the app's performance that is best for your business. The goal is to pinpoint the primary objectives of blockchain-powered app development early to determine and simplify the app's primary functions. Choosing the motivations behind developing an app will give you the best chance to succeed.

Blockchain is a revolutionary technology but also awash in misconceptions and falsehoods. Examine and decide if you need blockchain to solve your problem to meet the goals you want to achieve without blockchain. Could you fail to accomplish it even if you did it? In the end, knowing how crucial blockchain is for your business is vital.

After you've decided that you'll need an app with decentralization, the following step would be to pick an appropriate platform for developing blockchain-based apps.

There are a variety of platforms available. You can create your blockchain-based structure from Scratch. Or you could choose one of the most popular Blockchain platforms or use a white-label service offered through blockchain as a Service and use the cloud services provided by third parties.

The decision will depend on the issues you want to resolve using your blockchain software and the mechanism for consensus or the protocols used in a Blockchain to agree on a single value of data.

The process of creating a blockchain framework can be expensive and time-consuming. Therefore, consider the available open-source blockchain platforms and then use their software.

Due to the size and costs associated with a project such as a blockchain app development, we recommend constructing an initial prototype application to test the functionality before launching it.

This will allow you to test your ideas and consider the roles that participants in the network will play, the kinds of transactions they'll perform, and how they'll communicate with databases.

At this point, it is crucial to determine which components of your application will be placed on the blockchain and which won't. Certain features of your mobile or web application may need blockchain-based technology. They could instead be hosted on cloud servers.

After the admin consoles and user interfaces have been designed, the application is ready to be developed.

At this point, the base code of the application is developed. Development typically involves the efforts of various specialists, including front-end and back-end developers, QA experts, Software Architects, and Project Managers.

The primary purpose of MVP (Minimum Viable Product) development is to minimize risks, especially when you’re using blockchain and distinctive features that no one has created before. It is best to start by launching the simplest version of your application. This will allow you to confidently test your app concept without having to invest a lot in the process of developing it.

Once the app's code is completed, it is time to launch it to the network of choice before launching it on the market. When developing mobile apps, you must submit your application for approval to Google Play and App Store. Suppose you choose to work with a software development firm. In that case, they will usually assist you in applying to the app store and completing the necessary procedures without issue.

The development process continues after the app's launch into the world of commerce. Your chosen solution will require continual development and support to ensure seamless operation and top performance.

Cost of Developing a Blockchain Application

You probably think about the price of creating a blockchain-based application.

The final price depends on many variables:

If you are hiring blockchain app development services USA, hourly rates start at $100 and could go up to $250 in some cases. Offshore app development outsourcing is an option for those who want to access the best developers in the marketplace at affordable costs.

Companies originating from Europe and Asia are attractive to start-ups from all over the world because you can enjoy the same high-quality services at two times the cost compared to those in the US market.

We hope that you find this guide on developing apps for blockchain helpful!

With the information above, you must be wondering about developing a blockchain app. We'd love to meet and discuss this! We'd like to hear your thoughts and help you with your ideas.

Be prepared to implement the new features in your ideas for mobile app development with Consagous, a reputable and reliable business dealing with Blockchain development. We can help you in your journey to decentralization!