Everything About Apple’s Next Version iOS 13!!

Every year the iPhone has come up with new and tuneful features. This time it made everyone daze with high standard security features. Once again it regains its glory atop the smartphone market with its new version iOS 13. Mobile app developers are also showing their interest in its features and putting them while Mobile app design and development. 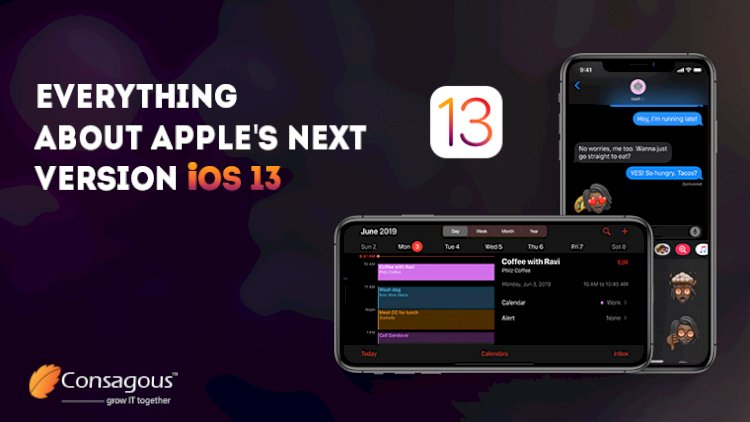 Every summer Apple announces a new software update to stun people, this year no difference as expected, the big release iOS 13 encountered in the floor to allure the audience.

A whole new look of Apple mobile is catchy enough to gather the attention of iPhone users. With iOS 13, iPhone has come up with a bold new look with major updates. Now you can use the apps that you use every day with totally different ways with more new gesture features and emoji’s.

Which iPhones are compatible with iOS 13?

Here’s the full list of devices that can install iOS 13:

Apple typically launches at least one new version of the iPhone each year, with amazing features. Here are the updated features of new version iOS 13 of iPhone.

Apple has updated its Map, now it looks more 3D-like and is loaded with detailed map data. Apple used thousands of LIDAR-equipped cars to gather this data. A new Apple map reveals more detail about the world and helps the user to navigate easily in an unknown city and county.

Currently, the iPhone map is pretty limited, not available in London or in New York. Even in San Francisco, its release wasn’t purely reliable. Other than these, the new Apple map has an ability to share your estimated time of arrival when using directions to navigate to a location.

Only you need to tap the “Share ETA” bottom of the navigation view, and it’ll continuously share your live ETA until you get there. Today iPhone mobile application developers are also started integrating this 3D Map while developing iOS mobile apps.

Apple has added new Memoji options in its iOS 13 version, along with three new Animoji: Cow, Mouse, and Octopus. Now, iPhone users can make Memoji by their own with new hairstyles, headwear, makeup, and piercings and can use them in Messages, Mail, and more.

Siri has also changed its voice, now its voice sounds much more natural, and the user will find a new Suggested Automations feature for personalized shortcuts. In Apple new version iOS 13, Siri supports Live Radio, and the personal assistant can access stations from iHeartRadio, radio.com, and TuneIn. CarPlay in iOS 13 has been modernized with a new Dashboard view for music, maps, and more, a new Calendar app, and Siri support for third-party navigation and audio apps.

Privacy and security have been the main concern of every mobile users and Apple somehow stand in users expectations. But recent news of data leakage from Apple left them in the circle of doubt. To regain the user’s trust, Apple has raised its standard of security and allow users to Sign in their account without sharing their email address with an app or service that uses Sign In with Apple.

Apple has even created a “Hide My Email” feature to create a unique single-use email address that forwards real email address but doesn’t reveal that email address to third-party apps or services. Even camera storage has designed around security and privacy.

iOS 13 allows users to create their personalized look by changing the intensity of light in Portrait Lighting. It has also some beautiful monochromatic effects that can intensify user’s photos with Portrait mode.

Therefore mobile app development companies are started availing this feature while designing a mobile app for a curated view of user’s best moments of every day, month and year.

iOS 13 is going to offer more amazing features for power video editing. Its new tools let users to control any adjustment or filter to fine tune their photos. Important camera features, enable users to change the intensity of light in Portrait Mode, which is something we’ve wanted for a while. Portrait mode is also getting a new monochromatic effect called High Key Mono.

Nearly every tool and effect you use on your photos can be used on videos, including rotate, crop and auto-enhance.

Apple iOS 13 version will surely gain recognition just like its previous other versions. Currently, users are facing some issues with this latest version but we are sure that the iOS team is also not sitting blank, they are doing something good to overcome existing deadfall.

If you want to know more about iOS 13 and iPhone App Development Services, drop your query, we will solve it as soon as possible.